Promoting Prowess with the Paddle


Who's Who: Franziska Pokorny

Who's Who: Franziska Pokorny

Franziska Pokorny has a background in rafting and white water canoeing and was one of the first cohort of ACA Freestyle Instructors in Europe. 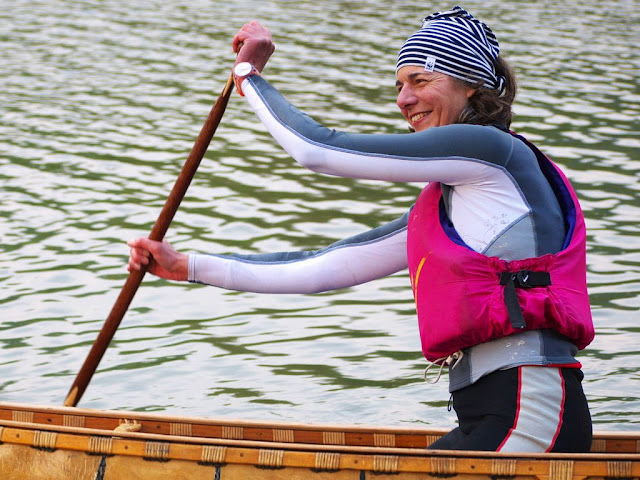 Here's Franzi introducing herself as one of the first two Vice-Chairs of ACA Europe:

I live in Ilanz, a small town in a mountain valley in Graubünden, Switzerland. A few kilometres from here the river Rhine springs and makes its way towards the Northsea on a journey of over 1200 km. It was here, where the mighty Rhine is still young and frolicsome, when in 1990 I started my career as a raft guide. I hadn’t paddled seriously before, I was unsuspecting but filled with enthusiasm for this adventure. And it was here, where I first saw people in open canoes riding down the river. I had by then already experienced my first attempts in a kayak, which was so la la, but then, when I paddled the first time in an open boat, I was hooked.

A [few] years later and after some ACA courses in France I became an ACA instructor. With ACA I learned another view of how to teach canoeing, and that there are other options than competition and power. I wanted to pass on this ACA philosophy of paddling and the ACA way of how to instruct. What especially fascinates me in canoeing is the variety: I can be out for days or weeks with all my equipment and I can reach areas which I couldn’t possibly on foot or with other transport. Or I can play and get wet.

As Ratty, the main character in The wind in the willows says: "There is nothing, absolutely nothing half so much worth doing as simply messing about in boats". That is true. (Although: I had to learn, that there is another option having a lot of fun: mess about on a SUP!) Besides, I know no other sport where you can go back to the beginning, start all over again learning about techniques and have so much fun with it. Thus, four years ago, I became an ACA FreeStyle Canoe Instructor. With FreeStyle I started to fully understand what paddling is about.What I try to teach my students besides a good technical fundament is to have respect for the water and for nature. To listen to the water and to try to understand. To know their own power and possibilities and to recognise their limits. How to use the dynamics of the water. To have confidence. To "mess about" with no fear but with respect.

There is another beautiful aphorism: "Water is a friendly element for those who are familiar with it and know how to treat it". It is from the German poet Johann Wolfgang von Goethe – who must have been a paddler!

Return to Who's Who - ACA "Advanced Quietwater" / "Freestyle"

Users browsing this forum: No registered users and 2 guests